The story of Disney and Pixar is emblematic of any industry where a digital transition is taking place. On the one hand, a mature industry that had made artistic creativity a key element of its success and on the other hand, a new emerging industrial declination that thanks to technology represented the new frontier.
_ Share
Share on facebook
Facebook
Share on linkedin
LinkedIn

In 1995, Toy Story not only grossed $361 million against a $30 million investment, it was the first feature film made entirely with CGI (computer-generated imagery). It was made by Pixar, a studio located in the anonymous town of Emeryville, an edge city overlooking San Francisco Bay that is the same distance from Oakland city centre and from Treasure Island. Pixar Animation Studios didn’t come to Toy Story out of nowhere though, it was born as a division of George Lucas’ Lucasfilm and only in 1986 became independent thanks to John Lasseter’s contribution. And here the story becomes compelling because Lasseter was a former Disney animator, who, dazzled by Tron and then not managing to get the company to make the 3D leap, turned to Lucasfilm and then to Pixar. In the meantime, Disney realised that a revolution was going on. The traditional artistic production that made titles like Snow White and Pinocchio unforgettable risked being outclassed by new digital techniques and above all was incapable of satisfying the renewed market demand. And so began a slow courtship of Lasseter, now considered a modern Walt Disney. He resisted and raised an inviting offer: “Let’s collaborate together but by involving Pixar.” Disney accepted and the first of many feature films that would mark the history of this partnership was called… Toy Story.

The story of Disney and Pixar is emblematic of any industry where a digital transition is taking place. On the one hand, a mature industry that had made artistic creativity a key element of its success and on the other hand, a new emerging industrial declination that thanks to technology represented the new frontier.

Today, as Hyphen found, the same is happening in product-related visual communication. Ten years ago, a fashion collection was made up of 500 pieces and of these 50 became the subject of a shot. Now, 100-150 thousand shots are required with the quality of the 50 or so images of the past. If we consider that photos were used mainly for catalogues and essential communication, we can understand how the communication of the brand prevailed over of a single product with fabric and colour variables.

E-commerce has contributed to the development of new needs in both the consumer and B2B sectors.

Low-resolution photographs on a white background, as was the case just five or six years ago, are no longer sufficient. For each season, high-resolution images of the entire collection are now needed quickly and affordably. By the way, we have gone from two seasons to three and, considering fast fashion as well, there is never a period of suspension. It is the digital showroom that has really changed the rules of product storytelling: a major brand manages more than 70 thousand shots every season.

“All this forces you to think about new strategies and industrialise processes,” explains Andrea Turazza, CEO of Hyphen. “Every sector within the company is involved, from the marketing department to product managers. The critical issue is to match quality with productivity.” And in that sense, not all photographers have grasped the potential of this transition. Pixar’s John Lasseter must have had a similar experience when he was dialoguing with creative people at Disney. “Today there are two types of photographers. The one who wants one beautiful photo so he takes three great ones that don’t work together. And the other who understood and became a part of the production chain”. Focusing only on the creative outcome, putting the rest on the back burner, reduces productivity by one-third compared to the Hyphen solution platform.

“We created sets, operating modes and tools to maintain the creative quality of the shot but by reasoning from an optimisation perspective,” adds Turazza. “We’re talking about shooting lists already in the console, product codes, shooting views with shot types for each product category and receiving channel, dashboards for job progress history, etc.”

In short, the principle is to govern a production process by combining the production needs of industry and the creative needs of the brand. The key is in the format. “If a client wants the midday sunlight of a specific location for the shots, there are two options: I go to the location or I create a format that reproduces the situation,” explains Turazza. “Reasoning by single photo and by format is different.”

Shooting View is a tool that allows you, for each product category, to define the images needed during the entire life cycle of a product – from when it is conceived to when it is discarded. It acts primarily as a design optimisation tool, because it allows you to estimate costs and production time of the entire content production process, not just a portion of it. De facto control returns to the decision-maker. Production, quality, choice of creative treatment and other steps combine to provide consistency to the project, reduce post-production tasks, reduce time and of course costs.

Think, for example, of the management of chromatic elements, which in post-production are much more complicated to implement than interventions on shapes. With Shooting View, you work with profiles and backgrounds defined in the design phase; in post-production only discretionary and non-technical elements are taken care of. “The result is that average quality increases and some of the time gained from more repetitive processes can be devoted to creativity,” Turazza points out. “The moment you use shooting view the style, IT, product and marketing areas are forced to talk to each other. With the compartmentalised approach, each one often undergoes the decision of the other.” The project defines and takes command of competences: hierarchy fades and declines on the comparison, a compromise on the road to production excellence.

Beyond the silo-like organisation, there is a systemic approach

In complex businesses, organizational silos, i.e., vertical departments that are separate in relation to competence are often used. One of the limitations is that they tend to think singularly instead of globally. And so, in cases of cascading processes it is as if the departments replicated the relationships between customers and suppliers although they belong to the same company (!). The side effects on flexibility, costs and time are devastating. All it takes is one speck in the gear to slow down the achievement of goals. Not to mention the responsibility game that obscures the critical issues that have emerged and complicates the implementation of any solution.

“At times we’re the ones who introduce colleagues who work at the same company. Our efficiency is on the supply chain and not on individual need. You probably complicate a photographer’s life, but those extra seconds for him turn into less hours in the supply chain,” explains Turazza. The IT department is often compressed by the marketing and creative departments, while in this transition it becomes a hub for data management and systems connections.

“We are not doing anything different from other areas such as manufacturing and logistics,” concludes Andrea Turazza, CEO. “After setting objectives, we rely on the most efficient conceptual and digital tool.”

“The format can become a very powerful tool in the hands of a photographer with a great ability to see. The creative director will continue to establish the narrative arc of a signature, but the art director and whoever sets the shots will always shoot the arrow. It is no longer a job of capturing something, but of leading towards a goal.”

Digital product identity: a new declination for the “digital twin” 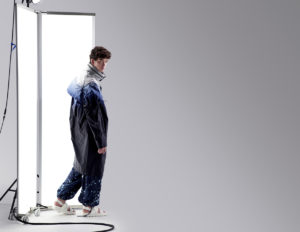